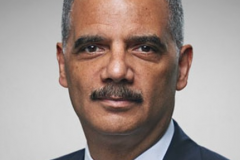 Eric H. Holder, Jr. made history in 2009 when President Obama appointed him as attorney
general, the first African American to hold that position. Holder served in the Obama

Administration as attorney general from February 2009 to April 2015, the third longest-
serving attorney general in U.S. history. During his tenure, he championed hallmark
legislation on voting rights, immigration law, national security, and same-sex marriage. Now,
Holder has continued his pursuit for civil rights in his post-White House career, serving as
Chairman of the National Democratic Redistricting Committee and using his unique
expertise in his role as a leading voting rights advocate.

Holder’s highly anticipated first book, Our Unfinished March: The Violent Past and Imperiled
Future of the Vote-A History, a Crisis, a Plan (May 2022), co-authored with Sam
Koppelman, is a dramatic history of the vote in America and an urgent summons to protect
and perfect our democracy. Holder takes readers through how the vote was won in three
stages: first by white men, through violence and insurrection; then by white women, through
tax strikes, direct action protests, and mass imprisonments; and finally by Black Americans,
in the face of lynchings, terrorism, and assassinations. Holder then addresses how the vote
has been stripped away from Americans, before delivering his visionary ideas for how we
can become a true democracy.

After over 30 years in government service and private practice, Eric Holder is internationally-
recognized for his expertise in the most crucial issues of our times, from the economy to civil
rights to cybersecurity. In his candid talks with audiences at universities, corporations,
conferences, and communities across the globe, Holder provides a fascinating insider’s
account of his storied career in the Obama White House and thought-provoking insights into
today’s headlines, concerns, and trends.

Among his many accolades, Holder is the recipient of the American Academy of
Achievement’s Golden Plate Award, GLAD’s Spirit of Justice Award, the National Urban
League’s “Living Legend” award, the NAACP Legal Defense Fund’s Lifetime Achievement
Award, and the National Legal Aid and Defender Association’s Lifetime Achievement Award.
In 2014, TIME Magazine named Holder one of the year’s “100 Most Influential People.”
Eric Holder has delivered commencement addresses at Boston University, University of
Virginia School of Law, Harvard Law School, the UC Berkeley School of Law, and the UCLA
School of Law, and was Columbia College’s Class Day Speaker. He holds a B.A. from
Columbia College and a J.D. from Columbia Law School. In addition to his civil rights work,
he is currently serving as Senior Counsel at Washington D.C. law firm Covington & Burling
LLP.